This tweet by Carlos Whittaker has been retweeted by a few of my Internet friends:

"Quiet Time" may be the biggest lie my generation deals w/from youth ministry. I don't connect w/God like a monk.More like a mariachi #Party

I’m not quite sure what he means by “lie,” though this subsequent tweet by Alan Jacobs certainly seems to be relevant here.

Something that seems to have become epidemic recently: saying everyone you disagree with is “LYING.”

It’s strange that Whittaker equates 15 minutes of reading and praying with being “like a monk,” and even stranger that he thinks that quiet time is mutually exclusive with encountering God through a party. I see assumptions like these a lot, and I’ve decided to call it ASATS – All the Same, All the Time Syndrome.

ASATS is one of the reasons why my wife and I have stepped away from the dominant “contemporary” worship style of evangelical churches and sought out churches that use historically rooted liturgies. In contemporary worship, it’s always a party. We visited a church recently that used a countdown clock to mark the exact moment when worship would begin. At 0:00, the drummer immediately launched into an uptempo rock beat. Within moments, it was as loud as a rock concert. The music remained within a few decibels of the same volume up until the moment the sermon began. Even the announcements and welcome message were given over loud background vamping. Though this was only one Sunday, I bet that most Sundays are exactly the same. No one programs a worship countdown clock on the spur of the moment. END_OF_DOCUMENT_TOKEN_TO_BE_REPLACED

Richard Foster, The Freedom of Simplicity

The notion of apostles as “illiterate” would have been a surprise to many throughout history. (Photo credit: Wikipedia)

NPR recently interviewed Reza Aslan, a Muslim convert to Christianity who later left the church, but never lost his fascination with Jesus. He has a new book out about Jesus called Zealot.

Overall, I found the views expressed in the interview to be much more nuanced and considered than many of those from ex-Christians who write books about Jesus. In particular, his point that Jesus was crucified for sedition is a good one, though his following point that one should focus on the death of Jesus, rather than his birth, isn’t going to cause too many waves among practicing Christians. Those “in the know” have always recognized that Easter is more important than Christmas.

This part, though, about the education of the apostles and nature of the New Testament struck me as an example of someone applying anachronistic assumptions about authorship and literacy to ancient texts.

[The Apostles] were farmers and fisherman [sic]. These were illiterates; they could neither read nor write, so they couldn’t really espouse Christology, high-minded theology about who Jesus was. They certainly couldn’t write anything down. Instead the task of spreading the Gospel message outside of Jerusalem, of really creating what we now know as Christianity, fell to a group of urbanized, Hellenized, educated Jews in the Diaspora…

Some of the apostles were fishermen, certainly. Matthew was a tax-collector, but for most of them, we simply don’t know what their professions were. (I don’t know where he gets “farmers” from – none of the apostles are ever identified as farmers.) Considering the economy of 1st century Judea, “farmer” seems like a decent enough guess for their professions. On the other hand, Jesus spends much of his ministry in cities, and we learn in Luke 8 that his disciples included several wealthy women from prominent households.

Further, as Kenneth Bailey (among others) has written, “literacy” in the ancient Middle East was quite different than the skills we think of as “literacy.” The inability to read or write should not be confused as a measure of an ancient person’s education or intelligence. In  oral cultures, the ability to remember and recite is more highly valued than in our contemporary culture. The Pharisees, for example, believed that the oral traditions transmitted alongside the written Hebrew Scriptures were indispensable for correct theology. (This oral tradition was eventually written down as part of the Talmud.) It’s virtually certain that the apostles, like many other first century Jews, had large amounts of Scripture committed to memory. The New Testament implies that they did the same with Jesus’ life and teachings. (For example, Paul uses technical language from rabbinic educational methods to describe how he was taught about the resurrection.)

As far as the fact that others wrote down the Gospels and other early Christian letters, the New Testament freely admits as much. The use of secretaries and scribes was common in the Ancient Near East; we have records of prominent politicians and scholars discussing  their reliance on literate servants.

Finally, regarding the apostles’ abilities to “espouse Christology, high-minded theology about who Jesus was” – well, who could? Observing that the scribes of the New Testament were urban Hellenistic Jews doesn’t really explain anything. As I have written before, the ethical and theological content of the New Testament, written by a handful of authors from the same small circle of disciples in a very compact geographic area over a couple of decades, is unprecedented in human history. Matthew’s Beatitudes, Mark’s miracles, Luke’s parables, John’s high Christology (yet written in such simple Greek), Paul’s ethics and theology, the typological faith of the anonymous author of Hebrews, the powerful apocalyptic imagery of Revelation – is this output any less remarkable if we think the authors were Greek-speaking city dwellers?

How do we account for this sudden explosion of religious genius? It’s as if Gandhi, MLK, Billy Graham, and the Dalai Lama all went to the same kindergarten.

One final thought: a book about Jesus by someone named Aslan? If this guy were an orthodox Christian, no one would believe it.

Last year, our family joined a church that observes the church calendar and uses traditional liturgy in its worship. During Advent, I was able to contribute a new hymn to the church’s worship, and tonight, during our Tenebrae service, we’ll be singing two of the Good Friday hymns I wrote for my master’s thesis. You can download the full set here.

Early in the service, the congregation will sing “The Second Word: The Song of the Thief.” The hymns follow the story of the crucifixion, and several of them are written from the perspective of one or more of the participants. In this case, it is the thief on the cross next to Jesus, who is struggling to understand how Jesus can promise him Paradise while dying on the cross. END_OF_DOCUMENT_TOKEN_TO_BE_REPLACED 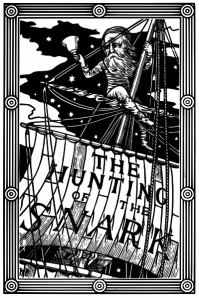 The cover of Lewis Carroll’s The Hunting of the Snark

This past weekend, I attended a Via de Christo men’s retreat near Seymour, Indiana. This is the Lutheran version of the Cursillo 3-day retreat that originated in Spain among Catholics in the 1940s and has since spread around the world.

My sponsor, Greg Geiser, asked me to leave my phone at home for the weekend, so that I would be able to focus more easily on the retreat, rather than spending my free time checking email, Twitter, Facebook, etc., etc. This request became easier to obey when I dropped my iPhone in the church parking lot and shattered the screen a few days before the retreat. We were also asked to put away our watches for the weekend, to help us focus on each moment as it came and rely on the retreat staff for our schedule, instead of anticipating the next meal or tracking how long an activity was taking. So, for a period of about 84 hours, I didn’t have any means of telling the time or checking in with my usual media feeds.

Two observations stuck with me from this experience of leaving my phone at home.

I too often use social media to “check out” of my immediate location. Throughout the retreat, there were several period of down time — waiting in line for meals, waiting for the next activity to start, walking from one building to another — when I was tempted to pull out my phone and check Twitter or Google Reader. Then I remembered that I didn’t have my phone. Instead, I had to be present wherever I happened to be. This led to several conversations that I would not have otherwise had, as well as a beautiful early morning view of snow falling on a lake that I would have missed completely if I were laying in bed reading Twitter.

Social media fuels my natural snarkiness and allows me to indulge in dehumanizing sarcasm. The men at the retreat were, in many ways, a microcosm of the church, comprising a wide range of education and income levels, as well as a few with rather “unique” theological perspectives. I wish I was more mature than this, but several times a sarcastic thought crossed my mind. Without Facebook or Twitter to record my passive-aggressive sarcasm, though, my sarcasm had nowhere to bloom, and the thought was killed on the vine. As the weekend went on, I found the sarcastic coming less and less often, and the other men became brothers in Christ to me, rather than punchlines to a joke. (Well, most of them did, anyway.)

Upon returning to the real world, I’ve been less tempted to use social media to distance myself from my surroundings or depersonalize other people. As the residual effects of the retreat fade, here’s hoping that this weekend marked a change in my relationship with technology.